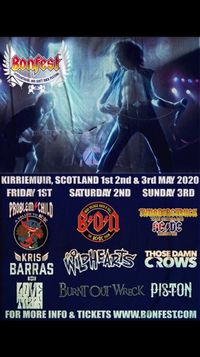 Bon Scott was born in Forfar, Scotland, UK and in his early years before moving to Australia, grew up in Kirriemuir, Scotland, UK.

For the past 15 years a festival is held in the name of Bon Scott, inviting tribute bands , initially for the UK & Europe, until now 2020, one band from the USA & Melbourne's very own THUNDERSTRUCK are included with BON from Germany. Each of these bands does the Headline for the night in the Huge Festival tent. Over the weekend Around town, all day in the pubs of Kirriemuir, cover bands and some original bands play from midday through to late.